as i finish the first week of my second semester, i feel confident that this semester will provide me with much of the tools i need to refine a topic for my thesis, which is at the moment, still undetermined. i'm only taking three classes, but will have plenty of reading and researching and writing and therefore i am thankful for the extra time to accomplish it all and to accomplish it well as i wrap up 2008. my bibliography grows quickly in the right column of this blog, as i will add my texts for this semester:

Posted by brianprince No comments: Links to this post

"an idea so big, that only two eucalyptus trees can hold it up." that's how i started my long-shot-of-a proposal, the relax project, yesterday. in short, i officially submitted a proposal to erect a 36-foot hammock on the corner of st. college blvd. and arts dr. between two eucalyptus trees. it would act as a friendly reminder that life's gonna be OK. afterall, art is supposed to provoke emotion, right? 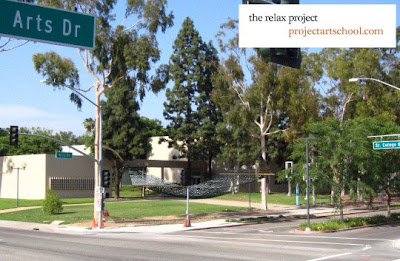 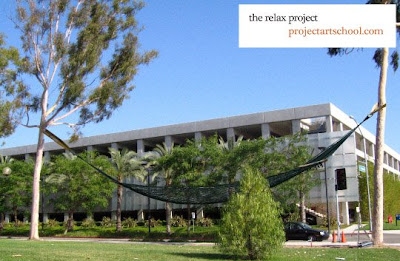 the complete proposal is below:

OVERVIEW
The Relax Project seeks to erect a permanent sculpture, a 36-foot hammock, in an unused space between the Visual Arts department and the Nutwood parking structure.

OBJECTIVE
The purpose of this project, other than it’s bigger-than-life presence and impact, is to trigger a sense of relaxation and promote subconscious thought within a society of high-anxiety students, and the general public alike, as they enter or exit the campus, in a bigger-than-life way.

BACKGROUND
As a student, assignments, tests and an inconsistent schedule are all big concerns that come with a great deal of stress. It’s very rare that a student is encouraged to take a little “R&R” during a semester. The Relax Project is a reminder that "everything will be OK.” It is a deep breath. It’s a sigh. An AHH! This project, if nothing else, will put a smile on the viewer’s face.

This work of art is designed to be a confrontation, without the confrontation. Internal, but external too. It’s taking a stand, not for laziness, but for one of the most important ingredients to a student’s health: rest.

FREQUENTLY ASKED
Q. Will people be able to lay in it?
A. Technically, a large van is able, but it will be high enough in the air to where it cannot be disturbed.

Q. What will be beneath the giant hammock?
A. Quicksand.
Just kidding. Currently there is dirt. This will evolve as the concepting becomes real. It can be anything from sand to artificial turf. It can even have a putting green beneath it. Or maybe artificial turf painted sky-blue with airbrushed clouds.

Q. How does this relate to your major?
A. It doesn’t. It relates to life. Mine and yours.

Q. Are you serious?
A. Academic-anxiety raises many concerns and should not be taken lightly. Smile more. Yes.

As it may seem out-of-place for an MFA student studying Graphic Design to dream this up, it really hits home with Everyone. Attached are rough simulations displaying scale to bring this project a little closer to real life.

Thank you for your time and consideration of this proposal and it’s attributions to CSUF. Most importantly, thank you for considering an idea so big, that only two eucalyptus trees can hold it up. 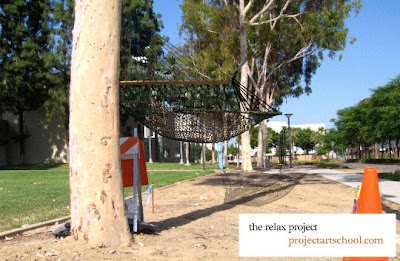 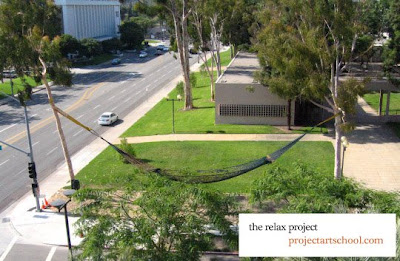 summer just disappeared this week, but not on a sour note by any means. i had a sweet summer filled with adventure, rest and rejuvenation. today i go back to school for my second semester.

this summer i decided, amongst other outlandish things, that i am going to track my hours spent in the MFA program. i have posted at the top of this blog an ongoing count of the hours spent towards schoolwork and research, school-related functions and meetings, and extra-curricular activities that further the goal towards my MFA.

i am tracking more detailed use of the hours spent and will save that for some interesting tufte-style graphing towards the end of my grad school journey, roughly some time in 2011. also in the works is the project artschool Expense Report, which will essentially track similar details as my time, but in the dollars i've spent. i'm not sure what will make me faint sooner, but both time and money are valuable resources that i'm lending to this program.

and since, once again, this is the journal of my journey i must add my schedule for this semester Fall 2008: Wed_ 483A Special Studies with Drew, Thurs_ 480T History of Graphic Design with Roche, and Fri_ 448 Artists Books with Connie Sasso.

stay tuned for posts on my projects and research for this coming semester, it's gonna be a busy one. and for the final wrap-ups for 2 of my summer projects, olympictograms.com and the relax project proposal.
Posted by brianprince No comments: Links to this post

a day of Edward Tufte.

well i managed to make it to the all day course, "presenting data and information" on wednesday and i can't stop thinking about all the simple, yet complicated theories mr. tufte (pronounced TUFF TEE) rattled off. even though it was hard to cough up the fee since "my employer" doesn't pay for these things anymore, i still enjoyed every minute of it. having a "student ID" saved me $180 and i continue not to regret that i am my own employer.

beyond that, i was accompanied by the famous alex "ajax" jackson. we got there pretty much the minute it started and found ourselves walking into a packed ballroom. fortunately we found two seats next to each other, in the front row! i was fascinated with everything – from 10am, when i received my four free edward tufte books, to the minute we got into the 45-minute-parking-structure-exit at 4:30pm. it was hard to label the crowd taking this course. mostly looked like sales people or middle-management of some sort. i noticed some people didn't blink to tufte's wisdom, while others allowed their ego to roll their eyes into a hollow head. all in all, i physically felt out of place amongst the dress shirts as i wore my shorts and slippers but was totally engaged mentally.

i took seven and a half pages of notes in my handy 2008 journal. 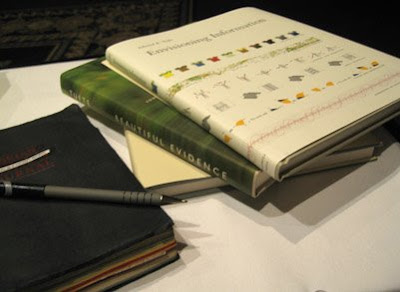 tufte managed to continually bag on PC users and microsoft — powerpoint, in particular — which was to my great delight. and he has a fairly crass attitude in general with the occasional self-indulged joke, but who can argue with the man, he's a genius. he explained 6 major principles of analytical design from his book, Beautiful Evidence (pg. 124), that are the highlights in my notes and are clearly something that i will take away and utilize as i pursue this glamorous (twisted) field of graphic design. he starts the chapter off with the ingenious and gorgeous map that Minard created to communicate napoleon's invasion on russia.

ajax and i each got one of our books signed.
here he is waiting patiently to have a question answered. 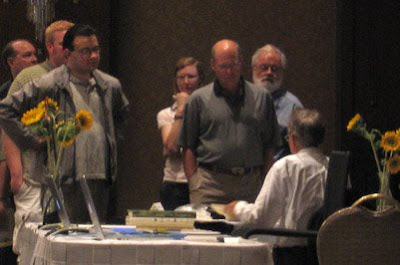 and here he is trying to grab Tufte's wrist watch. shady, i tell you. :) 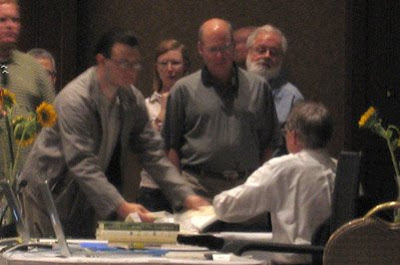 i'm excited to dive into my new books including a book his mother wrote, "artful sentences: syntax as style."
Posted by brianprince No comments: Links to this post

i just came across the word Gebrauchsgraphikers today and i thought it was cool. it's german for commercial artists. i stumbled upon it in steven heller's design literacy (continued) for the third time right around the essay on Ludwig Hohlwein.
that's all.
Posted by brianprince No comments: Links to this post

Edward Tufte is the king of analytical design. you can find a load of info on him and his books here: edwardtufte.com

Posted by brianprince No comments: Links to this post

one funny video here. that is if you are a font freak like myself.
font conference (click)